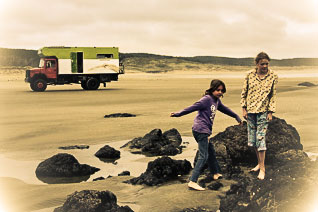 When I am in the middle of something great I just don’t have the time to write about it.  Right after I am just numb and filled with awe.  Later on I look at the photos and say, “Dang that was great”.  Here is me writing about one of those great experiences from last year.

There we were, standing on the edge of the beach, watching the small 4x4s driving onto the beach, disappear for about 10 minutes, return, then drive back onto the road.  There is another 4×4 with special beach tyres waiting for people to get stuck so they could be rescued.  I see Andrew looking at the tyres on Maggie.  Nope, they haven’t changed, they are still not special beach tyres.  We know that if we get stuck that little 4×4 couldn’t pull us out.  It really isn’t worth the risk for just 10 minutes, anyways.  Jenna and I have been pouring over the map.  We figured that if we start when the tide is going out we just might make it.

The plan is this.  Leave the green car behind because even though our home is 4×4 our car is not.  We drive onto the beach as the tide is going out, as soon as there is beach enough to drive on.  This gives us several hours to make it to the top of the beach and drive back down to get out before the high tide swallows up the beach and any vehicles still remaining.  OR those little dotted lines at the top of the beach, on the map, just might prove to be another way off.  Don’t know.  Jenna and I figure we should tie it a shot.  However, we AREN’T the ones driving and we are far from the worrying, responsible sort of women.  Here, I would like to present a random theory.

Somebody in a relationship seems to need to take the role of the responsible, cautious one.  Unfortunately this role seems to generally land upon the woman.  If, however, a woman decides to reject this expectation and throw caution to the wind.  If she refuses to grow up and worry then the man just might take on the is role.

In response to my worry theory.  Well, actually in response to 2 women who were ready to go for it without giving the risks a reasonable thought, Sam and Andrew were beginning to show a bit more caution.

The tide would be right the following morning.  So, we found a safe place to park the car, Got some award-winning fish and chips and slept.  We had already filled the truck with food and fuel at the last town as we wanted to be prepared for any adventure.

Ah, the exhilaration of driving onto a pristine beach with no road.  Not quite sure what was ahead.  We drove, stopped to play and check out the mussels, then a seal.  Near the top of the beach we saw a river estuary that we later discovered was supposed to be our way off the beach.  We continued to drive tip a rock cliff tells us to stop.  To the right we saw tall grass coming out of the sand dunes and decide to spend the night there.  We figure that high tide won’t go that far.  Just in case,  we go quite deep into the tall grass, As far as we can take the truck.

This place feels like paradise.  Beautiful clear turquoise water, a rock cliff jutting out into the ocean, a small spring fed waterfall with ‘sweet water’.  On the inland side is sand dunes with wild grasses.  It doesn’t take Andrew long to get out his fishing gear and find his perch on the rocks.  It didn’t take him long to catch some beautiful rock cod.  The kids set to explore the tide pools.  Abi has an infection in a wound on her leg so she goes into the ocean to soak it in the healing salt water.  A stingray comes up to say hello and she quickly finds her way out of the water.  We stay here for almost a week.  We fish and explore, talk and play games.  We cook on an open fire.  Yes, paradise. 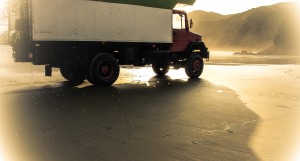 When it is time to go we drive a short way back down the beach to the estuary.  We stop the truck, Andrew and Sam go to explore.  There are some tyre tracks going up the river bed where the water hasn’t washed them away.  There are even some signs lie,  “Soft sand, increase speed”.  After Andrew and Sam walk it out a bit we decide to take the riverbed out.  We may be 4×4 but we are also very heavy.  We need to go onto the firm wet sand but if it is too wet we know we will sink down and get bogged.  After about 20 minutes we speed up to take a path up a steep incline out of the river and shock the wild campers at the sand dunes.  We have made it out without even taking the sand mats off the side of the truck.  Fantastic adventure!  Great driving Andrew!