What do they say. The best laid plans of mice and men.

We made plans to go to India and a major catastrophic event happens to wipe out most of the roads. What is that about. Well….. we think to ourselves. We can help. Help how. Bringing in stuff. But then what. Do we just become more of the hungry mouths to feed.

We planned on spending some time in EU and the Shengan countries changed the rules. Now, instead of 6 months in and 1 hour out it is now 3 months in and 3 months out.

What is all this about.

We try to be organized and are stopped at every turn.

Now we are feeling quite rejected and unloved by the border peoples. We are feeling more and more like we have no foundation.

We are thinking of doing something quite drastic. Andrew brought up showing the kids the countries they have passports to and hanging with some relatives for a bit. A round the world trip.

Dang, that sounds extravagant. I know people fly all the time but it is NOT GREEN and NOT CHEAP and I DON”T WANT TO LEAVE MY TRUCK and WHAT ABOUT MY DOG!!!! Dang, I sound like my mother not wanting to leave her home and her STUPID DOG to come and visit her daughter!

Oh no! Am I choosing my beautiful, cute, in-training mutt over my beautiful, amazing, self-sufficient 2 oldest kids. You know, I am such an external processor.

OK, lets try this with the other objections. I DON”T WANT TO LEAVE MY TRUCK. You know we have been offered this amazing huge warehouse in Germany to store her in. It would be so much better if someone wanted to use her while we were gone. You know, try out this nomad thing in Europe or something. That would be nice. Our truck could hang out with some new people or something. We’ll have to think about that one.

Next one. IT IS NOT CHEAP. Several of the people from this squat we are staying in right now fly all the time. THey say it is cheaper. It is just that big chunk at the beginning and the limited funds after. It just seems so extravagant. YOu know, people have been helping us out  in so many ways. NOT to by high-flying but to live simply doing good stuff. Still, we have been trying to find cheaper ways of bringing the truck and all by sea and havent’t found anything yet. But maybe we haven’t tried hard enough yet. If we bring our tipi and a small stove and pots to cook on the road it could bring the cost down considerably. Hmmmm.

IT IS NOT GREEN. I can justify this by averaging it out over the years but there may be no way of getting around this one. 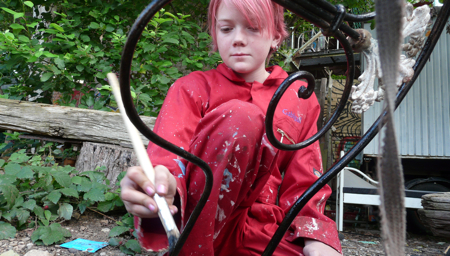 In the meantime we will continue to work on our truck

and look at beautiful skies 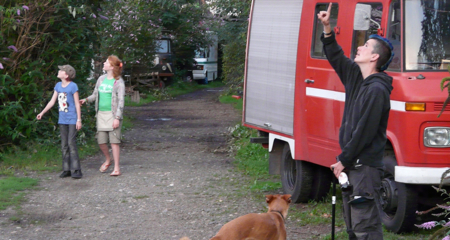 and hang with new friends.