Finally putting together some of our photos of fixing up Maggie. Here’s some that start from when we bought Maggie in November,2008. We think she has come a long way to become our home on wheels.

We found her at a farm a couple of islands over from ours in Orkney. Doug went with his son to pick up the truck so he could take the family on an adventure to Nepal. His wife said no. He kept the truck for a year waiting for her to change her mind. We bought it a year later.

Trying to source some windows from a local wreckers.

Maggie was a shell. She came with the metal framework and some fibreglass on the outside. The framework for the back benches was there. The floor is just junk pieces of wood laying on the framework. You see, the box used to be on a Bedford cab. The Bedford cab broke an axle because of carrying a heavy load on bad roads in Africa. The box was taken off the broken Bedford and put on the Iveco / Magirus Deutz cab. When the truck was shipped back to Germany the box was stripped and reshaped to fit the new cab better. To be honest I was a bit scared. It was hard to find a place to step without falling through the floor. In the gale force winds at the farm. The truck seemed to be breathing. The fibreglass flapping in and out with every wind. I wasnt sure I could ever trust her. She did not seem safe. However, Andrew was smitten by Maggie and there was no turning back. 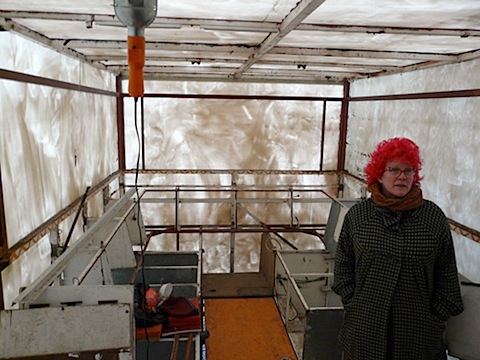 The cab needs a little tlc. 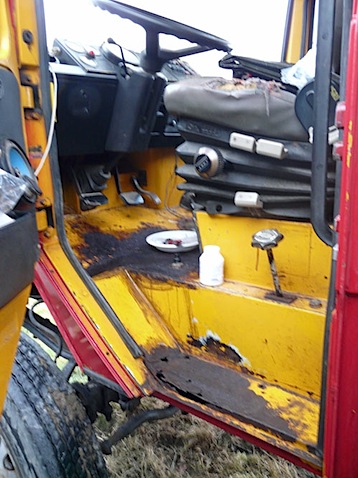 Doug had new fenders made but hadn’t had the chance to apply them. Here we have Andrew applying the new fenders on a very cold and windy day in Orkney. No, he did not just gain a bunch of weight. That is cold Northern winds filling up his boiler suit. 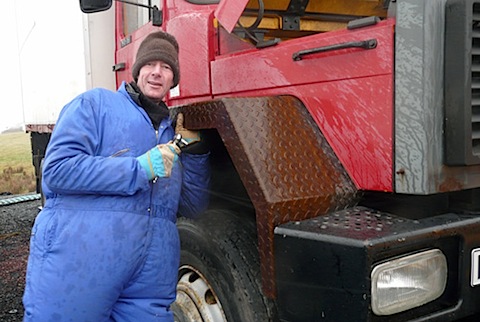 TJ found a good place to do her exercises while we were working. 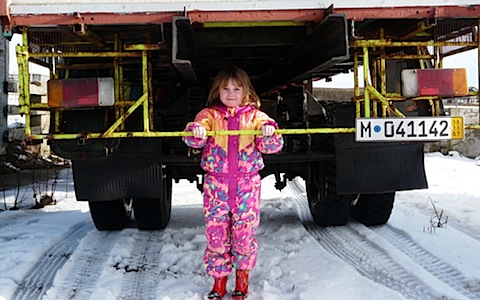 We are showing off our new window. Now with one window and a few other simple changes she can be licensed and insured as a motorhome. 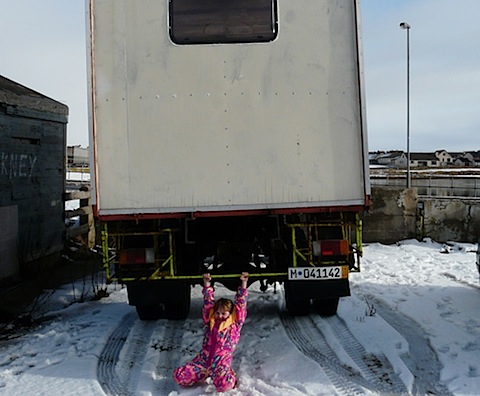 Starting to put in insulation and the floor. Being in the middle of the winter we were quite motivated to spend good money on getting the best insulation. We chose 40mm “kingspan” insulation. We didnt realize at the time what a good choice this insulation was. It not only keeps things warm in the winter but cool in the summer. We also used it to give stability to the fibreglass. We cut the fibreglass to fit around the metal frame and glued the insulation to the fibreglass with “sticks like sh*t”. Later we would glue the insulation to some large sheets of 3.5 mm ply and screwed the ply into the metal frame with self-tapping screws. This creates what we called an “insulation sandwich” and added alot of stability to the walls. 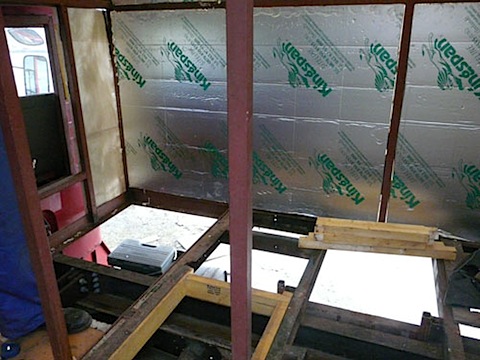 Andrew loves his new grinder. After grinding off everything that even hinted of a rough edge he was looking for more to grind. I took this manly picture of him through the open floor. 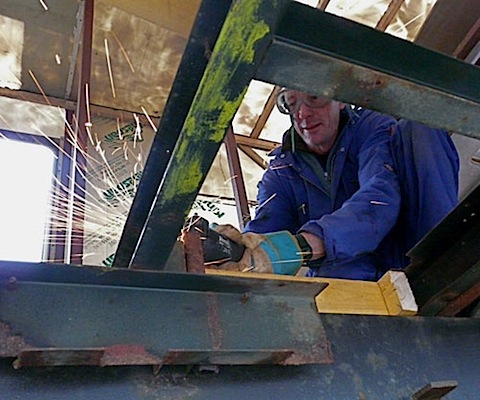 Bjorn the Orkney welder took off TJs exercise bar to put the spare tire under the back of the truck. Sorry TJ. 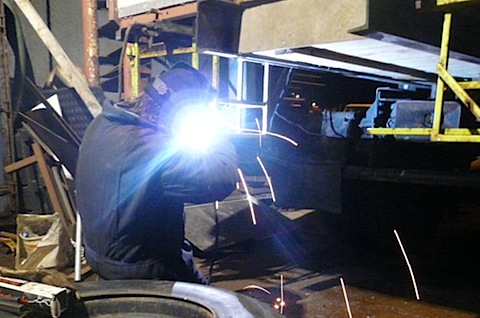 Bjorn using his grinder. I think it is bigger than Andrew’s grinder. Hmmmm, No Andrew we do not need a bigger grinder! 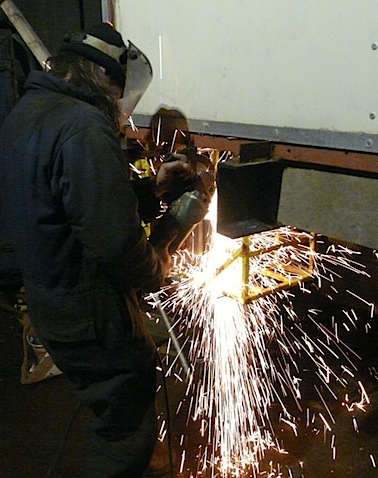 We had no parking at our flat so we got permission to work on Maggie in a parking lot a 5 minute walk from our flat. We got permission to use electricity from the shed next to us. He didnt charge us any money but we gave him a bottle of good whisky to say thank you at the end. Whisky as a preferred currency in Orkney. 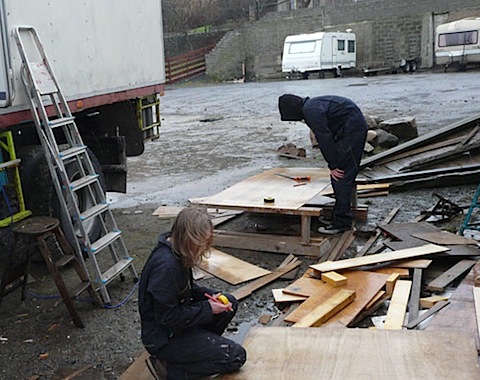 Remember the corner with the insulation up above. Oh yeah, we’ve been working. The wood is now up. We have a solid floor and Samuel has started putting in his bed which is just behind the cab and will work as a bench while driving. A note on the floor. It was put in by Samuels friend, Ross. He is 16 and has completed school to be a joiner. This floor is his first paid joiner job. He did a fantastic job. There is a solid layer of 1x3s with sheets of 18mm ply on top. I am SOOOOOO happy. 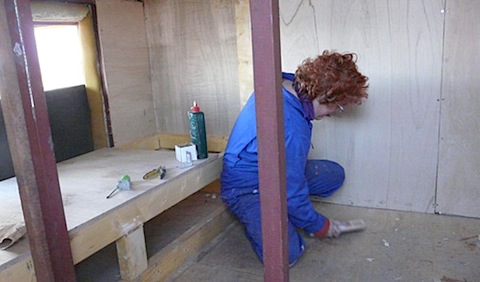 The ceiling is finished. The insulation is in. Ooooh look a window in the back. Isnt it pretty! Oh yeah we are a real motorhome we have a window. Well almost a real motorhome. 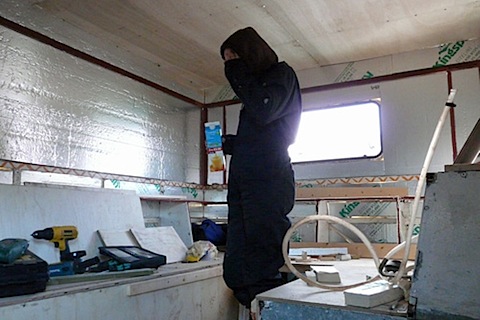 The beginnings of the girls bed. Chris Rowell found some nice strong pieces of mahogony hardwood that were perfect for the framework of the girls bunk. Notice the old mattress foam filling the gap between the cab and the cabin. We keep in working on this gap. The big problem is it must be flexible because the cab and cabin can move independently on rough roads. 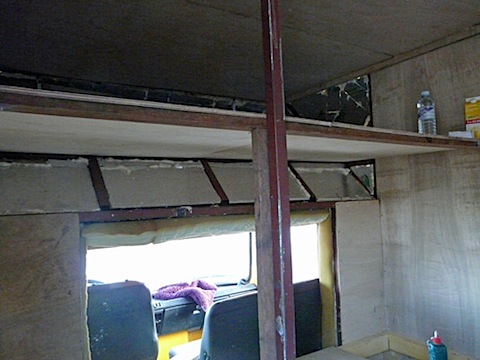 Samuel working on his bed. Behind him is pieces of a kitchen unit from a van. We were going to use the whole unit in our truck but opted for just the sink with the foot pedal pump mounted into an old table top. 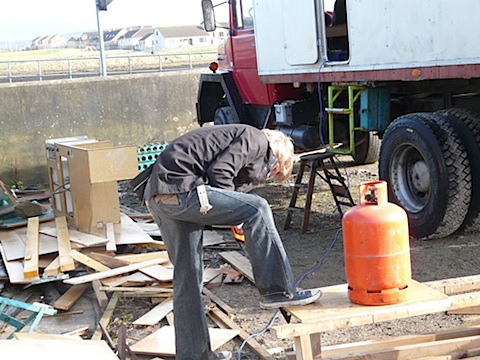 We decided to use the old kitchenette from our flat. I am happy. I love this kitchenette. The kids are scared. Hmmmm. 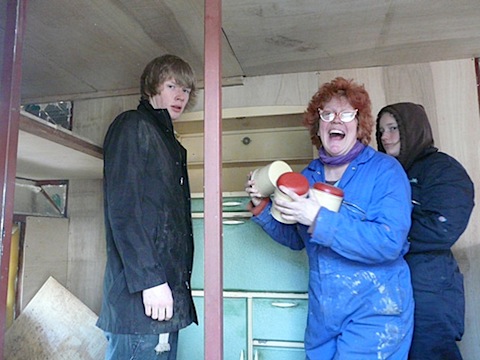 Andrew is pleased too and attaches it to the wall and framework with metal l joints. 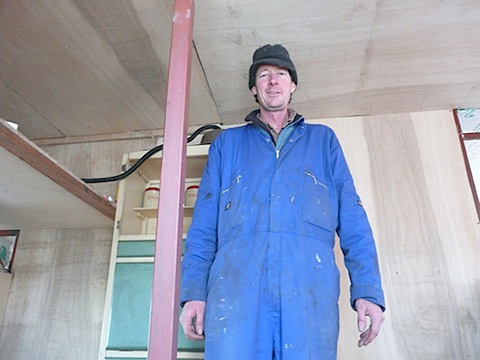 A photo taken of the family with Maggie. We think she is looking beautiful but we are still getting kicked out of campgrounds at this stage. They say we look like gypsys and our Maggie looks like a furniture truck. Clearly we have more work to do on the outside. We might even need more than one window. 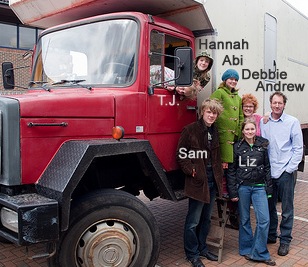 Portugal was great for Maggie. She got lots of tlc from Nuno’s friend and mechanic and a great welder that just came over from Africa. After spending 3 weeks in our Tipi at a campground we get her back. Look more windows. Barbara had given us 2 old bus windows that the mechanics put in. They made a ladder on the back and mounted the sandmats behind it. We had the sandmats mounted underneath before but figure they are normally visible and shown off because they are a signature of an overlander. They spray painted her and… 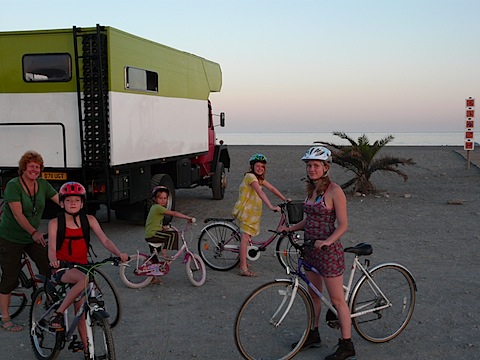 gave her 4 beautiful boxes. 2 on each side. They spray painted everything black underneath. We even found a spray painted bungy cord later on. They did a GREAT job. We think she is really looking like an overlander now.

Oooh look there is our third window. We are wild camping in Spain for the night. 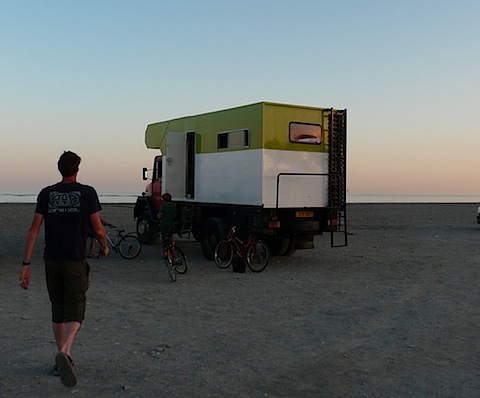 Andrew thinks the wheels need to be red. He thought red might be too crazy until me and the kids came up with the idea of painting the wheels to look like kiwi fruit that would look like they were rolling when we drove. He decided red wheels was the tamer of the options we wanted.

The wood on the benches in the back broke. Hmmmmm, well, I never said I was a carpenter! While visiting Wolfgang in Germany he employs the services of a real German carpenter to remake the benches. Check out the corduroy shorts. He did a great job. 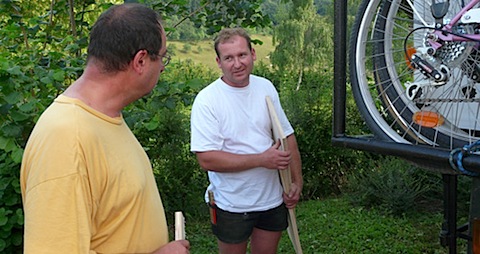 Did you notice we now have more bikes. They don’t fit on our bike rack anymore so we get a second bike rack to go on top. 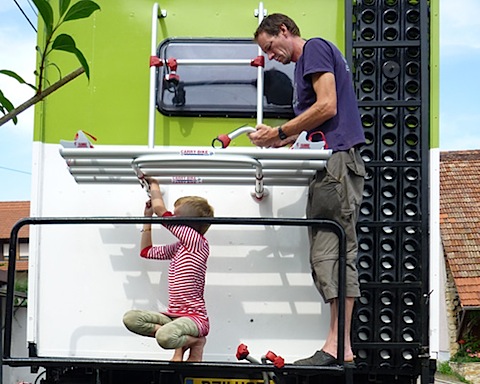 the Jones village set up at the derilect monastery for the slot festival, an arts festival, in Poland. You see our HUGE tipi looking quite small next to maggie. We got a small army of quechua tents because alot of friends are coming with no tents. We love quechua and their 2 second tents. Dont we look like a quechua advert, especially since the tarps are also quechua and Andrew’s shoes, and….hmmmm. 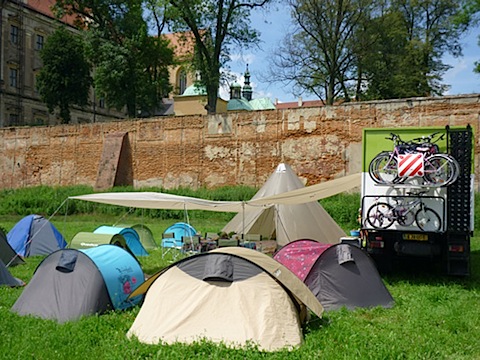 TJ has found a new favourite place to hang out. 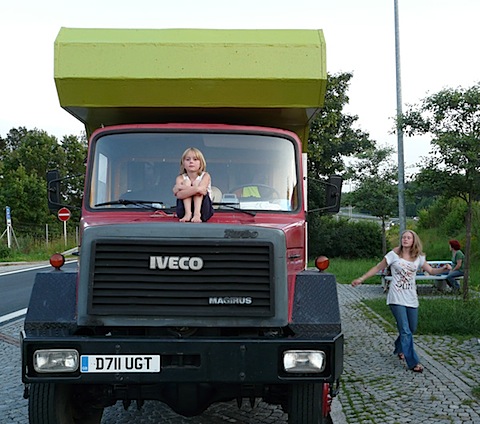 Oh yeah. This is what maggie likes to do. WIld camping on some old dirt path in the mountains at the border of Czech Republic. 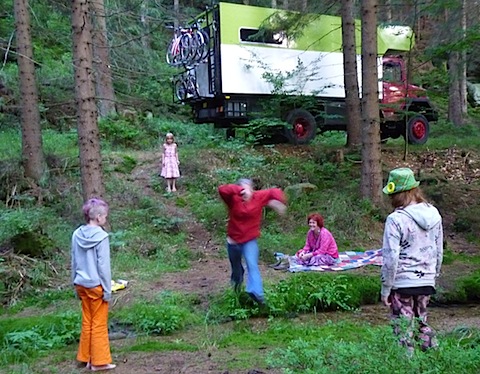 The inside is looking a bit better. At the top is CD racks put on their side with some round storage things from the IKEA kids area and a bungy cord to keep them from falling on our heads while we drive. The wallpaper on the walls we bought a couple of years ago at a charity shop. We think it really is from the 70s complete with gold specs. Yes that is fake leopard fur on those cushions. So, I like colour. Now maybe Andrew is getting scared. Oh yeah, you see that thing that looks like Abi has a halo. That is my chandelier. A work in progress. Frame and broken lights from IKEA. Glass flowers from France. Dragonfly lights from Portugal and lots of big dangly earings securely attached to the ceiling with 3 hooks. 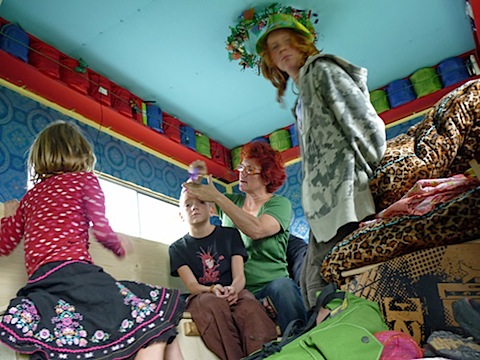 Time to put up the awning I sewed up in Germany

Isnt it beautiful. We now have some shade. 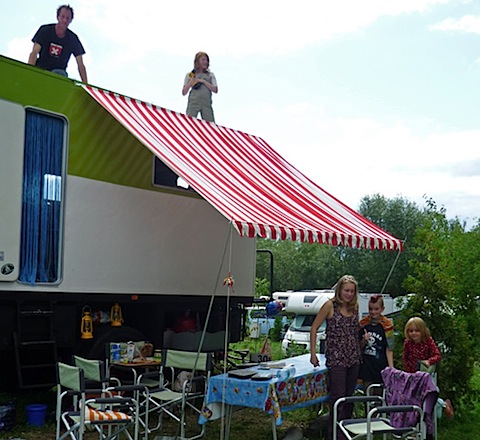 We found a printing shop around the corner from our stellplatz in Berlin that makes Auto Foils for 35 euros for 1 metre of print. After some quick design work by Andrew we are looking more legit. It says Jonesberries.com, the intrepid journey of the Jones family.

Our outdoor kitchen set up for feeding up to 70 people.

Our old kitchen cabinet is showing some signs of wear. Another german carpenter giving it some tlc. He doesnt have corduroy shorts, He has black suede ones and a very cool hat. I bet you have never had such a well dressed carpenter. Actually he is part of a special ancient travelling carpenter tradition in Germany. That is for another story. 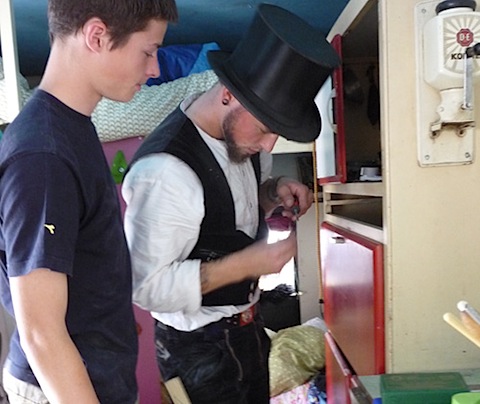 The inside of the back of the truck. The bungy cords that hold in the round storage things also makes a great clothes line. Note we now have 2 more bookshelves in the back. The kids are doing their studies. 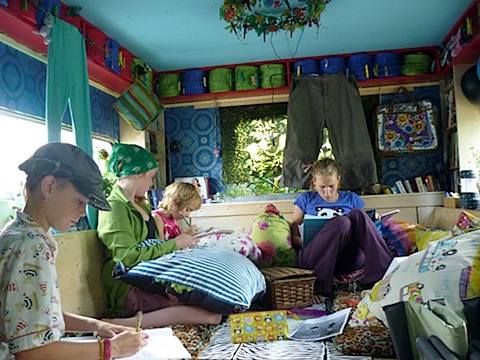 The front of the truck at bedtime. Girls bunk up top accessed by a climbing wall that abi made. Liz is on Samuel’s bed, he is out walking the Camino de Santiago for a month with Donald. She is geting ready to read from “the Princess Bride” for our bedtime story. I think she is annoyed we havent let her start yet. 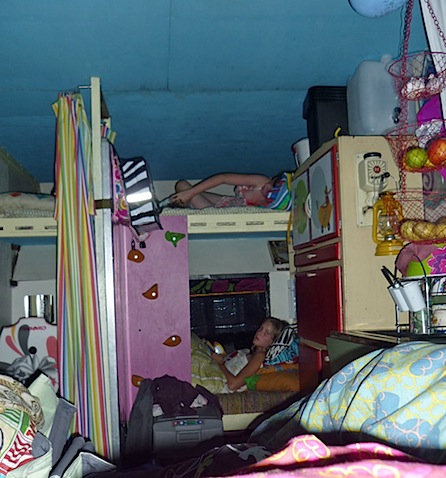 Our temporary toilet for wild camping. Also makes a great changing room. How do you like the boogie board backrest. Hey, we be stylin now. 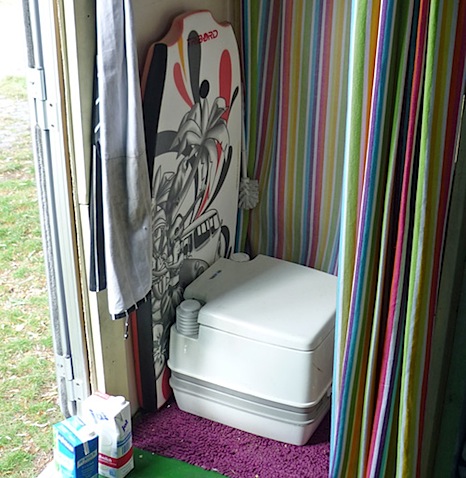