Had a great New Years eve celebration at Paulo and Edna’s house. We have taken our minds off the difficulties of the last week. We had no vehicle for days as Serge’s car broke, days later Paulo and Edna’s van broke, days later we arrived in our truck and after picking up Petr from the Airport got our dear Maggie stuck. Yes, I know, our overlander truck. Yes, our 4×4 truck. Add to this the fact that our truck is leaking and Paulo and Edna’s house is leaking. As a matter of fact we were thinking we would celebrate New Years by candlelight because the water is leaking into the walls and making it unwise to use electricity in parts of the house.

On the last day of the year Paulo and Edna’s van got fixed! They rushed off to the grocery store.

We had spent several days doing various “teambuilding exercises” that some people would pay dear money for.

We dug trenches, with our small foldable shovel, and made small roads for each wheel with buckets and buckets of stones we collected from around the land. We all carefully watched the wheels while andrew figured out the “locking differential” system. The sun had come out briefly and we were feeling determined to not go into the new year with a bogged truck. Slowly she climbed out of the mirey clay. 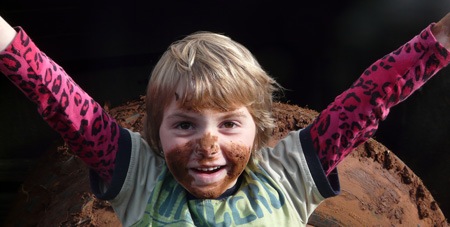 Just a half an hour later we took “Maggie” out to take Sam and Donald to the train station so they could go to a party in Lagos with Eddie and Rubin (from Conscious Earth). We also used this opportunity to go grocery shopping. Get the idea there wasnt much food in the house.

We had a great New Years eve and were collectively relaxed enough to miss the New Years countdown for Moscow (9:00), Turkey (10:00) and Germany (11:00) despite the presence of a funcional german in our midst. We were able to make up our own countdown for Portugal, only 4 minutes late, and most of us were able to take an ice plunge into the pool. I know what you are thinking, “Ice plunge? You are in the Algarve.” Well I gotta tell you it was cold.

Before, notice the ripples in the water from checking the water temperature.

And in. The sensible German guy, Petr, in the red shorts was the smart one. He calculated the dive needed to propel him to the quickest exit. 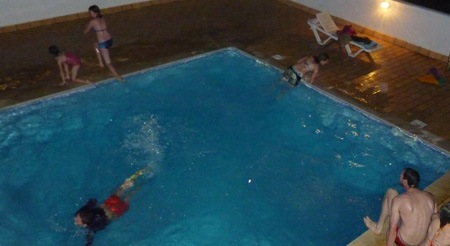 And seconds later almost everyone is out of the pool. Edna, being a great combination of extreme and relaxed is still in the pool – doing laps? Dang.

Anyhow, here’s to a bog free year full of taking lots of icy plunge opportunities, lots of friends, lots of sharing life and (at the risk of sounding too hippy) lots of love. What do you say. Lets hang together and be nice and loving and look out for each other. We want to try to be more selfless and look out for more opportunities to see the best and bring out the best in each other. We want us to be mother and father and sister and brother to others. You know, we think there is just too much fighting in our world and the God we believe in seems to think Unity is a pretty cool thing. We coined our own little saying this year, while we were picking olives, “Make olive oil not war”.

One of the many great honours this year was finally hanging out with Al and Tina. They would say “we just wanna love on people”. Hey, lets all do some of that, O.K.