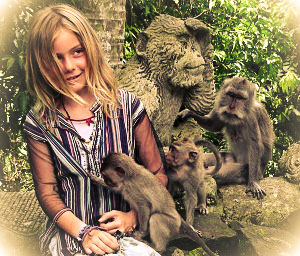 The last few days in Bali really sped up. We got to hang with lots of people who were Muslim, Hindu and Christian. We talked about religious practices and history, coffee and sugar, trust and peace, hostels and land, honour and respect. I learned about life in a country where religious divisions are part of your legal identity and printed on your identity card. I learned that Bali is 90% Hindu. 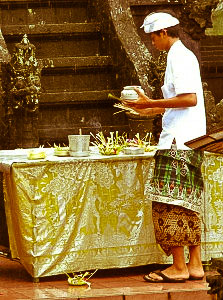 My daughter was not allowed to sit on the wall behind me because it would not be considered respectful for her to sit above me however I could sit on the wall above her. : )

The average Balinese Hindu spends a third of their income on small sacrifices of straw baskets containing a flower, a sweet (or cigarette – something of value), holy water and incense. These small baskets are everywhere, especially on the sidewalks and need to be prayerfully put out 5 or 6 times a day. It is preferable for the person to make these baskets themselves but most buy them.

Much of the beautiful, colourful artwork that a Balinese Hindu creates is disposable. It is trampled on or burned. The importance is the sacrifice and not the possession. I think this is beautiful.

When a Balinese Hindu dies they are buried in the ground next to the place of cremation until their family puts together enough money for the burial ceremonies. The cost is to feed the village for 7 days of ceremonies followed by the cremation. So, they believe you need to pay all that money to get your loved ones to heaven. I think this is sad. Seems familiar. Makes me more sad.

Everybody wears “skirts” – especially at the temple – women, men and statues. It is a sign of respect. At first this made me want to giggle but after being there for a bit I think I am beginning to get it.

In Ubud there is a place that is considered holy where very friendly monkeys hang out. There are no high walls to keep them in. I think that is cool. I don’t like putting animals in cages. These monkeys want to stay. I like that.