Ahhh. Africa. We love Africa. What to say where to start. We are in love. Even in the first day we felt overwhelmed and could fill a book with what we saw and felt. I will try to just show you some highlights of our outside journey and later the journey of our hearts is sure to come out.

After gazing out at Africa from different points in Spain we finally decided to take the plunge and go. When I was writing an email to my sister I realized that after so looking forward to going to Morocco I was kinda afraid. Silly really. Fear of the unknown I suppose. Terribly embarrassing for someone travelling full time to admit but there you go. I think it is one thing to talk about going to Africa for the first time, overland, with a truck full of children and teenagers. It is completely another thing to get on the ferry. So we got enough money in our account to book our ferry, with a little extra for petrol and food. Went to exit 112, found Carlos and bought our half price ferry tickets. While we were at the Lidl parking lot for the night, with the other motorhomes, who saw Carlos and were waiting to go to Morocco, we decided to head towards Paradise Valley. We have heard from many sources that Tangier is not the best place to hang around in so Paradise Valley was a good target.

The whole motorhome stampede to get onto the ferry was a far cry from the ferry trips we have had across the channel and to Orkney. It was actually quite funny. These little old men, some quite frail, behind the wheel of their “white plastics”, aggressively shoving into line ahead of another old man in his white plastic. Barely escaping bumping into each other.

We were so excited when we made it to Morocco but then had to wait in line for many more hours to be allowed in. The whole process took us 11 hours. Welcome to Africa? Or, welcome to the white plastic parade.

Actually the “welcome to Africa” came when we were getting off the ferry. Normally when we cross a border Andrew hands the person our wad of passports and the border official seems somewhere between overwhelmed and shocked. Here, when Andrew handed the wad of passports to the official the man looked up with a huge smile with all the other muslim men around. As they saw all the kids and teenagers they were ecstatic, commenting on Andrew’s extreme manhood, having so many kids. lots of energetic verbal and hand gestures. Andrew says, I think I’m going to like Africa.

While we were waiting in line at customs we made many friends. Seems like there is this brotherhood of self-builds and full-time travellers. We met a polish/french family in a semi-converted blue horsebox. We also met a dutch man with a self-conversion, it is sort of a caravan on the back of a mercedes van cab full of 9 hippies at the border. They were dancing around the other vehicles and singing and flute playing at the border. They were going to Paradise Valley too. They were going to a rainbow gathering there.

Perfect, we made ourself a convoy. We didnt know about the Rainbow Gathering there before but going to our first Rainbow is one of our goals for this year as we have so many friends that have been and have almost gone so many times ourselves.

We had a great time along the way. We learned about living on the road, raw food, african culture.

On one of our stops along the way Abi and Rachel went out to sit outside. Rachel (from the Hippievan) is a British anthropologist and speaks French, Arabic and Berber. Rachel was kind enough to translate Abi’s first 2 marriage proposals of the day. 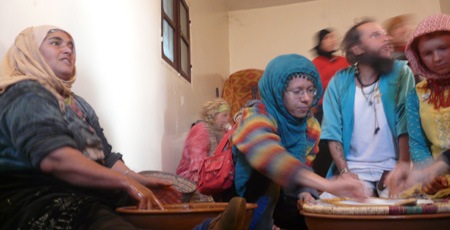 A little later we stopped at a ladies cooperative that made argan oil. What a great experience! Apparently the oil is quite sought after for cooking tagines and skin care. The Argan oil comes from a tree that is similar to the olive tree but only grows in this valley. We got to have a go at grinding the oil and met some wonderfully friendly ladies. We were invited to move in with the berber woman on the left. This is also where Abi got her third marriage proposal of the morning.

We also enjoyed the mint tea along the way. We were taught how to pour a proper mint tea. Donald is demonstrating here. You have the mint leaves and green tea and too much sugar in the pot. Pour the contents of the pot into the glasses from various heights. Pour the tea back into the cups. Repeat 3 times. Mmmmm. This is what they are drinking everywhere. Actually, the streets are lined with men leisurely drinking mint tea while their wives are…. where are the wives… I think they are home cooking or at the “Hamam”.

The Hamam. Now, I dont have any pictures of the Hamam seeing that it is a Bath house. It is where the women go in one side and the men the other. You walk into a room of mostly naked people with buckets of water and scrub each others backs with black soap and a scratchy mit. After your hamam the men go for a cup of mint tea and the women go…. I guess home. I know it sounds quite bizarre but we had a great time. The girls loved it. I really enjoyed being in this friendly all woman environment. When me and the girls came out of the hamam there was Andrew waiting across the street… with his mint tea.

Anyways, when we got to Paradise Valley, on the night of the full moon, the energetic teenagers left for the Rainbow gathering that night to walk by moonlight but us more sensible ones stayed at Mohammed’s for a night and walked the next morning.

We rented a couple of donkeys to help with some of the bags.

It was supposed to take us 2 1/2 hours but having small children it took us about 4 hours and we arrived right before dark. It was actually a stunning walk full of old villages, waterfalls, colourful people and goats. 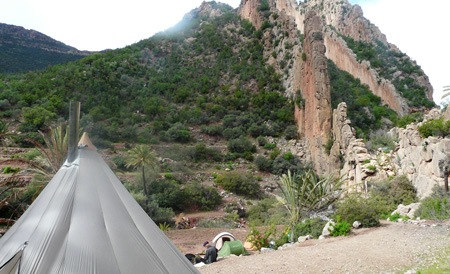 When we got to the rainbow gathering there were about 50 people in a valley that is – well – it IS called paradise valley. We think it was well named.

Andrew is having a great time. There are interesting truck/homes wild camping everywhere. This particular group was mostly german and dutch.

So where are we now? After talking to Mohammed and a few of the other people there for the night we decided to go to Aourir. It is next to Agadir. We found Hassan and are staying with the other full-time travellers, mostly french, in the parking lot while we get work done on our trucks. We have a huge list of things to get done. They have already rebuilt our muffler and are working on opening our roof. It was part of the original plans for our truck before we got it and the truck has been leaking where the two pieces of the roof overlap. We couldn’t afford to get it done in Europe and the work here is really good, fast and cheap. Add to that to be able to be with some great people as the work is being done.

We went to Agadir one day to the Souk (Market). Wont be making that mistake again. Way too touristy and touristy here means you get hassled alot. We really like the villages so much more.

Oh yeah, language-wise. If you hang out in the cities French is great, villages Arabic is better, really rural they only speak Berber.

Anyways, hope you are feeling a bit more caught up. Sorry, havent shared some of our more heart experiences but, to be perfectly honest we are still processing.