Well… out of Morocco, at least. We made it to Tanger. Had pizza with Karim.

Said goodbye to Karim and went to the ferry terminal. Not quite sure if we have this whole ferry thing worked out. Both times we are among the last to make it through the ferry terminal on the Morocco side. Whether it is landing in Tanger and getting through immigration and customs or getting onto a ferry to Algiceira. I wonder if we are missing something. If we are doing something wrong. We heard from one source that putting some money in your passport helps, or if we chose the ferry company with the least ferries or if it was simply the grocery store complex and your line always goes slowest.

It was an entertaining day at the port, anyway. Saw 5 teenage boys remarkably being pulled from underneath various trucks. They were trying to get a free ride to Europe. So, that is why inspections were so thorough. All the cars were searched but the larger vehicles were pulled off to the side where we had to all get out of the truck and Maggie some high-tech truck x-ray machine went over the top of or dear truck. We just sat there most of the day. All in all, did alot of people watching.

We think we may have even seen Mr. Bean. Well, kinda. One guy was quite entertaining. I think he wasn’t quite all there. Every once in a while he would come up to our truck and say, “It’ll be about a half an hour” and ask for a euro. He was also in the habit of grabbing people’s suicases when they were most the way down the stairs and asking for a euro. He was like a little boy that had watched his dad doing official business but didn’t quite get the plot.

Finally made it through – well after dark and headed for Gibralter where we had some people to see. We took the opportunity to get some of the foods we remember like English tea, HP sauce, malt loaf, bacon and cheese. Mmmmmmm. 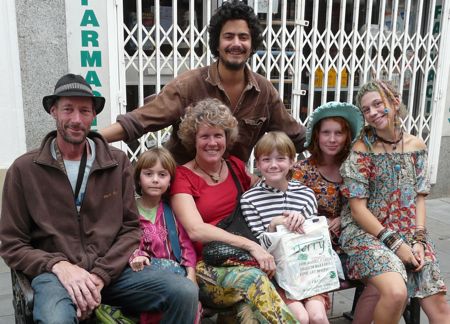 We also met up with Musa and hope to see him when we get to Beneficio. Musa makes amazing jewelry and is selling some in Gibralter now. We talked about having sort of an online store for travellers trying to support themselves by making and selling stuff. Don’t know how to do an online store. Something to think about.

We got kicked out of La Linea by the police again with the other motorhomes. Ahhh, just like old times.

We are somehow changed coming out of Africa. Some things are more obvious.

TJ went to a shop in Gibralter and saw a little butterfly t-shirt. She looked at the price of the t-shirt. “Hmmmm, 7 pounds. That’s alot of money. I think 3 pounds would be right and she started looking for the sales lady.” “TJ we aren’t in Morocco anymore and prices are fixed here.”

Hannah has been having a great time shuffling between 3 currencies in the last 2 days.

Alana and Abi are enjoying walking down a street without getting any extra attention. “So relaxing.”, They say.

Andrew is enjoying the macho feeling of coming out of Africa. We have been to Africa. Kinda like being in a new club. He also enjoyed putting a bit of wine in his spaghetti sauce.

I have enjoyed using some good washing machines and will, hopefully, enjoy a good clean out of the truck today. The outside of our truck looks great but the inside is falling apart a bit. Some of the cheap wood shelves are falling apart a bit. I think particle board is a poor choice for bookshelves in a home that is always bumping around.

Some things are not so obvious. People are right when they say Africa gets inside you. I have a feeling that many things we will not be able to label, they just are. I feel some sense of relief. Yesterday I was aware that every cell in my body was relaxing. I am also sad about leaving. Every cell in my body is also groaning.

I miss being woken up by donkeys and chickens in the morning.

We are now looking at the next season. Re-europing our truck. Pulling out the Europe maps and putting away the Africa ones. Looking at the next year. We will spend the summer in Europe. Not sure how much western europe or possibly Central Europe. Asking questions about the Rainbow Festival in Finland and Freakstock in Germany. Asking about other festivals. Thinking about friends we want to see. Thinking about making some things to sell and where and how to sell them. Got some fabric and wool for making some things. Thinking about wings. Yeah, I know, I just like the thought of making brightly coloured wings and seeing people walking around wearing them. Also thinking about spending time with friends. Making pottery.

In September we want to be in Turkey. We have met some other travellers that want to go to India. They all plan to meet in Turkey for a month of getting visas for Iran, Pakistan and India. I am the only one in the entire group, so far, that is carrying a U.S. passport, they think it will be no problem. There are 2 other families that want to go, A Croation family and a Swiss family. The Croation family has been there 4 times already. Seems like a good group to be going with. There should be about 4 or 5 trucks going, so far. We figure, may as well try. If it is meant to be it will all come together.