One of my loves has been throwing pottery. I still haven’t figured out how to make pottery on the road but fully intend to figure out how to. You see, I don’t want to use up all our valuable electricity on my pottery wheel and valuable electricity or gas on a kiln. My time in Safi has been great in figuring out how to do pottery Old School. With no electricity or gas but, even more than that, without buying clay but using clay from the hillside and processing it for the wheel. I had two trips into the pottery district.

The first time in I took a group taxi in and was taken to the ladies cooperative by a woman I met in the cab. We all had a go at the wheel and I was able to throw some pots with my new friends and was given some small chipped dishes to practice painting with donkey hair brushes. I was also taken up into the hill behind the market to see lots of other potters at work. I got to see a kiln firing in process.

On Sunday I went in again with Karim and met the man who did the kiln firing the day before and spent time with him, learning about the whole process.

DISCLAIMER: Further reading is only for low-tech infatuated pottery geeks like me.

So, here is what I learned. Pottery from Safi is made out of clay dug up quite nearby. It is brought in as small chunks of clay which are brought in by donkey cart and by hand into large piles next to where they are processed. 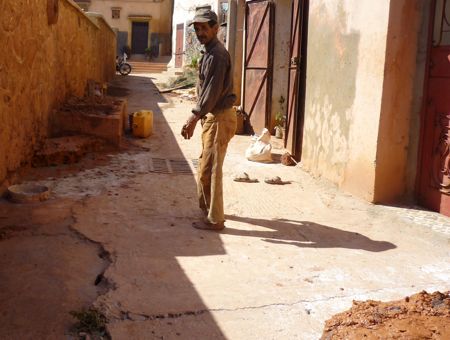 When ready the potter breaks up the clay further and places it in large stone tubs with water where it moistens until it becomes a large pile of goo. Wnen there are no lumps and the clay is all thoroughly moistened the clay is taken out of the tub and put onto a stone floor that has been covered in white ash from the kiln to keep it from sticking to the floor. The clay is thick enough to stick together but way to gooey (not so technical of a term) to knead or work with. The clay goopile (a debbie word) dries in the sun until it starts to dry. All the while pushing the edges up and eventually turning over the clay to keep the drying consistent. Alter the clay has dried some it is covered with plastic. Again, to keep the drying consistent. 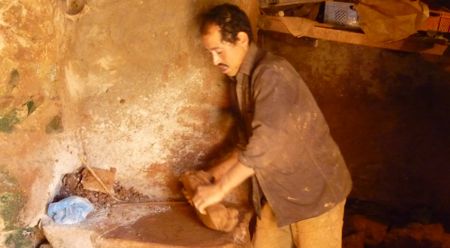 Once dry enough to work with a workable piece is taken inside to wedge on a stone counter. Part of the wedging process being to remove the air from the clay (strangely as the motions are quite similar to kneading in which you are putting air in) and part of the job being to remove small stones. all is done using the whole upper body strength being pushed through the base of the hand. To remove the air the whole piece is ripped in two and thrown together and then pushed together with the base of the hand. 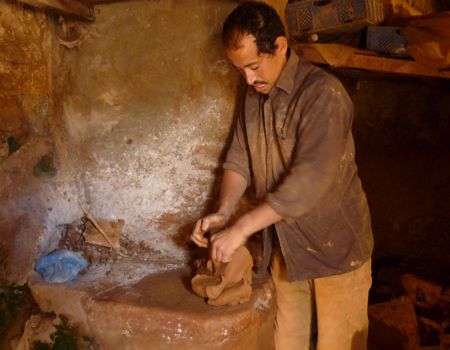 After this the whole piece is gone through with the base of the hand pushing down one layer then the other to remove the smallest of stones. When finished the piece is formed into a cone and thrown onto the wheel.

The bulk of the potter’s wheel is in a pit only revealing the small disc at above ground. The potter sits on the edge of the pit with his feet below ground working the lower wheel. The whole thing is made of wood for building boats with a metal pillar in the middle and some wire connecting the two lower wheels. I was told I could buy one of these wheels for 500 durhams (about 50 euros) if I wanted. The pots are thrown “off the top” of the large pillar and placed on pallets to dry in the sun. After 3 hours of drying in the sun and “leather hard” the pottery is brought back to the wheel and “turned”, the piece is put back on the wheel upside-down and the base finished off. More drying in the sun. 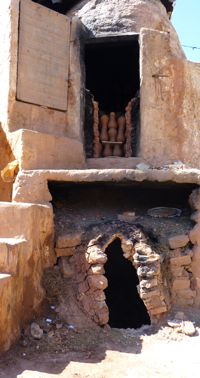 When fully dry, days later, depending on the weather,  the pieces are stacked in the kiln to be fired.

The kiln is like a large pillar or really wide chimney. At the base of the pillar is a opening for putting in branches. With the fire below the pottery is supported with a shelf of stones above above the fire. Above the pottery is a large opening . 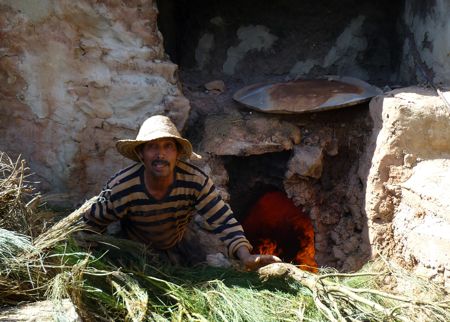 The kiln is fired with branches that have been dried in the sun around the edges of the kiln. The kiln is fired to 1200 degrees for 3 hours. They take out a piece of test pottery to see if it will ping or thud when broken. If it pings it is done. 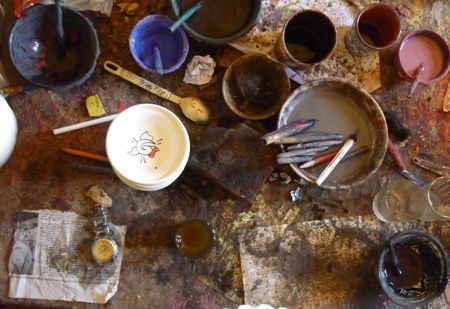 Decorating is done with coloured layer being added to many pieces when leather hard before the first firing. After the firing the final painting is done with oxides mixed with water (these are placed around in small bowls and need to be mixed frequently with small sticks). The colours are painted on with homemade brushes. These brushes are made out of “donkey hair” for the “best brushes”. The brushes are actually quite ingenious. large amounts of “donkey hair” is put in the end of a cheap bic pen with the ink cartridge removed. Most of the bristles are cut to about 2 cm with the rest about 5 cm long. The long bristles determine the width of the line. The short bristles hold onto the paint kind of like a paint reservoir to give a consistent line. This is all done in community. 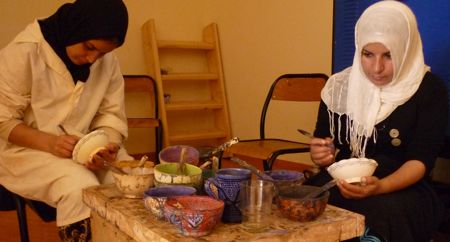 Generally a group of women, maybe one man, sitting around a low table each doing a part of the design. One doing the thick lines one doing the thin, another doing the spots, etc. Complex designs are frequently done after a grid has been drawn on. Perfect circles drawn on and 4 or more perfectly straight lines coming out from the centre to make a sort of clock face.

The pottery is dipped in a glaze. The glaze is the only thing that is not local and is brought over from italy. After glazing the pottery is fired in a gas kiln. Yeah, I know but they say people didnt want the wood fired glazed pieces as the ash from the kiln makes the glaze imperfect. They said the old style was different and could be fired by wood a second time. I need to get to a museum and see the difference in the old and new method. 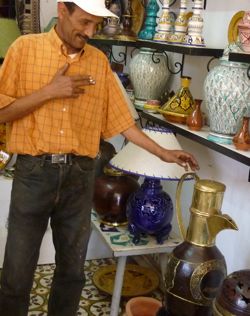 Here is my guide, from the first day, alongside some of his work. He wraps metal around pieces as a final embellishment after all the firing and other decorations are done. 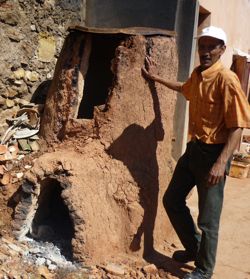 Also a picture with my guide and a small kiln we found. It was really great to see a small kiln as it would most likely be the size I could make in different places along the way.