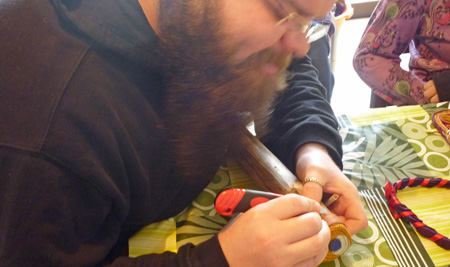 Over the weekend Alana’s family brought her back after getting her visa renewed. They also brought Steff with them. We had a great weekend together.  We were 19 all together. Lots of cooking and talking and laughing. We had some great food together. Of course, the Hurst family came laden with all sorts of good food including a banana cake, homemade bread and pasta. Once again, the Hurst family loving great food almost as much as sharing it. Abigail made some great puddings for Sunday (Wacky cake and a Portuguese Cookie cake). The cookie cake tasted great but didnt hold its shape too well – we’ll need to try that one again. Apparently it is the first cake that young portuguese girls learn to make …. hmmmm. Of course, we also had “Paulo’s Drunken Chicken”. Andrew was quite proud of his chicken and the fact that he could cook 4 chickens at the same time. Portuguese chicken is so great. They arent nearly as big as other countries but the taste of those little yellow flesh chickens, mmmmm. Anyways, when they left they took Peter (from Germany) with them. We have had such a good time with Peter. Peter, our multi-talented friend.

While gathering sticks for making Didgeridoos he found a smaller stick and used it to teach Lizzy how to make a rainstick. He taught “circular breathing” to Sam and Donald so they could play didgeridoo.

He had an impressive collection of Freakstock wristbands. He went up to Lisbon with the Hursts and then will go up to Porto to Paulo’s other tattoo parlor.

We will miss Peter and his gentle heart, wise words and good teaching and and and.