Projected Lawrence of Arabia on the cement wall next to the truck on Friday night. Karim made a fire for us to cook our pizzas on a stick. Most of the people here at the garage came over to enjoy the movie with us. We all watched the movie until the power cut almost at the end of the movie. Wonder if we caused the power cut with our projector? Naw, can one projector cause a power cut for a whole village? 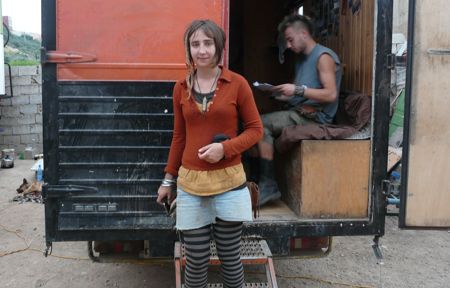 Some great neighbours from France with a great truck – all wood inside. Reminds me of a log cabin. Owners of the dog with the funny smile. 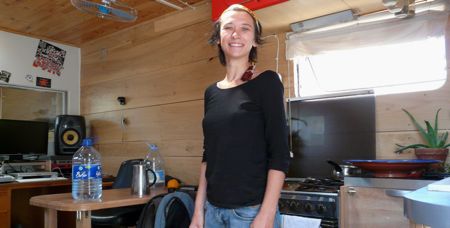 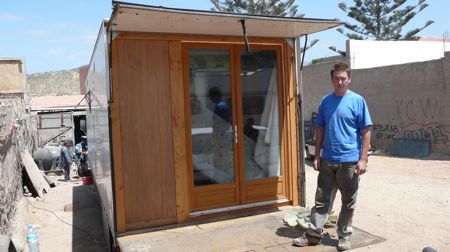 And the back opens to a garage and a back patio. We are SOOO impressed!

Andrew is softening on the dog front. Figures a dog might be good for security. We have been talking to some other travelers and they said it is no problem to bring back a stray dog from Morocco. We just need to get a rabies vaccine, a computer chip and a doggie passport. Ireland and Switzerland have a blood test required as well to show the vaccine is working. So, Alana and Abi found a stray at the Souk that they appropriately named “Soukie” that they thought would be a candidate. Andrew went out to meet the dog and thought he was a possibility. “Just bring her in to the yard and we’ll see how she gets on”. Sounds easy huh. 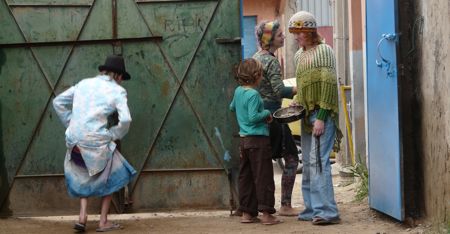 Maybe some fish heads would bring him in. 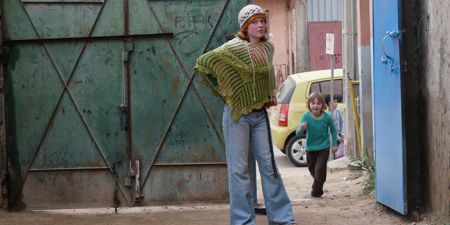 After what seemed like FOREVER of coaxing the girls returned to the truck exhausted and with no dog. Maybe Soukie isn’t the dog for us afterall. 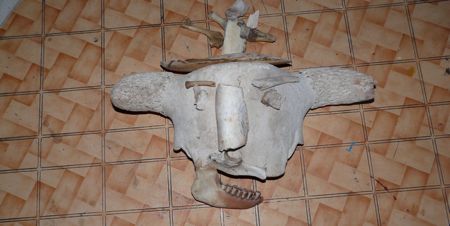 TJ has been collecting animal bones. Hannah thinks they are gross and scary so TJ only brings them out to show to whoever she can whenever Hannah isn’t around. After looking at each bone thoroughly and discussing where it could come from Hassan put together this face with the bones. A true innovative mechanic putting things together in unexpected and bizarre ways. He must have been an interesting child to have around when he was a boy. 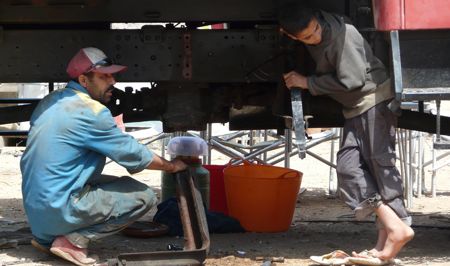 One of the men working on our truck is a very nice young man who has a serious crush on Abi. In the photo he is the barefoot one on the right. Alana says it is just like the movies. She and Abi were walking past him and he swooned. You know a lingering look, a smile and a full body sigh. This happens every time he sees her. Just like the movies.

We had a whole lot of men working on the truck yesterday. The diesel tank is here. The 2 tanks are side by side in the photo. We have more than quadrupled our diesel capacity. 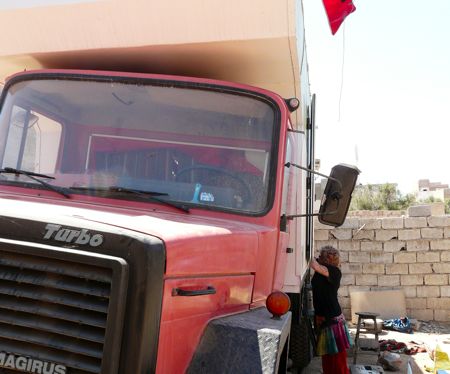 Andrew was trying to describe 3 point torsion-free mounting so they wouldnt put the tank in too high. You see, where the cab and the cabin of our truck meet they move independently as they are only connected at one point in the front. They sort of pivot on each other. So the cab and the chassis (underneath the cabin) tilt one way and the cabin stays straight. It makes it so we don’t stress the box on rough roads. Took me a while to understand. To try to get his point across to a bunch of unbelieving mechanics Andrew jacked up the right front tire of the truck to show how much smaller the space gets above the petrol tank. They got it and put the tank in the lowest position.

So, Andrew is a very happy man. After a full day he finished off the day painting his new tank with orange primer. I went out to see him laying under the propped up tank slowly and affectionately finishing off the painting as the sunset behind him. You see, men do get emotional – just about completely different things than us. At the end of the day Andrew crashed. Happy, tired man.