We have finally left Portugal. I know, I know, but we love it there. So anyways, here we are outside Gibraltar. We have been wild camping with about 30 campervans etc. We were in this big dirt parking lot right next to the border crossing. Kinda surreal actually. We were in Spain, La Linea de la Conception. We were carrying our passports so we could go back and forth from “Little Britain” (Gibraltar) to Spain. Gibraltar was great for some tastes of where we have been calling home before starting our journeys this time. Elizabeth went to Morrisons and filled a bag with malt loaf. Andrew took some of us to a pub and we had chips and cheese. Samuel, Donald and Alana were busy til late evening going back and forth from country to country. Me and Abi found some insulin and even a place to get a blood test done for her diabetes for just 9.90 OK, not as much fun as malt loaf but necessary. Hannah is just happy to have some more famous 5 books from the second hand bookstore.

Once you cross the border you walk or drive across the airport runway, through a tunnel and into, well, a great big duty-free street. I must say, we were a bit disappointed with the amount of English books. Maybe our expectations were a bit high. We did find a good second hand book store in a cake shop. We did have a good time.

We made lots of new friends. Full-timers, like us. Pen has lived on the road for years and is sporting a van conversion of his own creation. 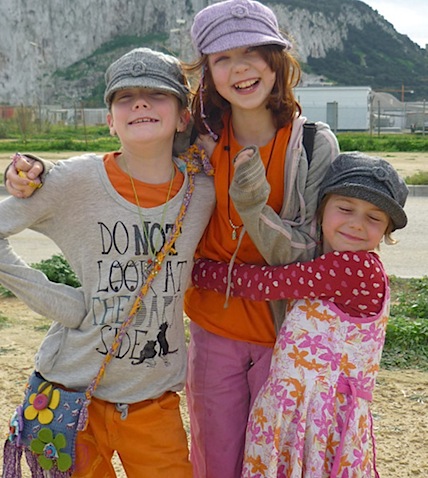 Pen took off 5 years ago with some friends for one year. After one month he realized he wanted to do this full-time, went back long enough to sell his house and is living off the interest. It is just him and 2 stray dogs he adopted in Spain. “Boss” and “Wife” took off in the big green bus one month ago with 5 big dogs and her daughter, “Child” (10 years old). She became instant friends with TJ and Hannah. Here they are sporting their “best friend hats” they found at a Chinese shop.

Boss’s wife had cancer a couple of years back and after chemo realized she had strayed far from her teenager dream of travelling full-time. When her hair grew back in curly instead of straight she cut it into a mohawk and started to make plans to start travelling with her daughter. As far as wild camping, well, we are coming to the conclusion that Spain seems to always be hard. After 3 days in La Linea we were moved on by the police. I tell you in 10 minutes everyone was gone. All except 2 motorhomes. One of the remaining motorhomes had a blown engine and the second motorhome had the new engine for the first on their trailer. It is strange. Portugal seems to be quite accepting of wild campers as they spend money locally. France and Germany provide special low cost camping but Spain. It is SO HARD to bring a motorhome here. Campgrounds are really expensive and wild camping is really difficult. We are meeting more and more people with some experience on the road who skip through Spain as quickly as possible. They jump from Southwest France and plan their trip perfect so they can be in Portugal by the next evening. If they want to go further south they go to the south of Portugal and skip, as quickly as possible, to Morocco via Algeciras (where the cheap ferries are).

We have now left the Gibraltar area and are in Tarifa. We have just spent one night in a campground. Taking showers, washing clothes, charging electricity. After being overwhelmed at my big bags of laundry I have decided that small and decentralized is better. Just like our trash. When we first started out we accumulated big bags of trash that were hard to get rid of. We switched to small plastic carrier bags. Problem solved. So, applying the same principle to our laundry. Everyone will keep a pillow case in their locker for their dirty clothes and they will be responsible for it themselves. Dispersed and personal. If this doesn’t work we will have to try something else.

Unfortunately it rained the whole time so we were at this campground, huddled in our motorhome, walking through a lake, that had formed outside our truck to get anywhere. We did get to hang out and watch movies with our ample electricity.