TJ lost her second tooth and is unsuccessfully practicing her sssss sound.

Abi woke up in a cheeky mood and is showing off her 10 stitches during her dressing change.

And the new dressing is in place.

Had a great time with our old friends from the rainbow gathering that we found in Guilmim the day before.

The time was great but way too short time together before they took off to hitch to Mauritania and Senegal. 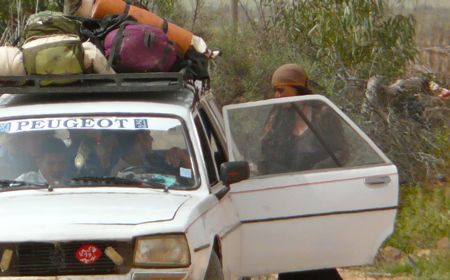 We were hoping to go with them but have decided to start going north at this time. We have heard that we need a Carnet de Passage to go further house because our truck is too old. I think we need to get to work on a Carnet so we can go next time.

After they left Andrew got some work on greasing up the wheels and steering. A messy job with lots of gooey grease.

Well, do you ever say it was one of those days. This is one of those days that is one in which you fall into bed at the end of it and try to block out thoughts of “what if”. You just dont want to go there. Here is our day.

It started out just like the day before, only less wind. You see the Plauge Blanche is a part of the Sahara that pushes out to touch the Atlantic Ocean. One of the most beautiful, most void of people beaches. Little overland jeeps showing up like ants to drive up and down the 60 km stretch of beach. Fisherman shacks dotting the coast. No shops. Only an occasional fisherman offering some of his days catch. We had to bring in all the food and fresh water we would need for our stay. We showed up to find 3 other trucks full of friends already there. Friends from Holland, UK, Spain, Morocco, Czech Republic. Actually, more like family now.

Two days before we braved coming out of the truck with goggles and scarves to face the wind for the sheer adventure of it.

The day before was filled with eating together, surfing, boogie boarding, smothering ourselves in blue mud and rolling in sand dunes.

Yesterday started with boogie boarding and surfing. Andrew and Hannah went out with boogie boards under their arms to join Leike and Pavla  to get some surfing tips. Being around so many surfers lately has caused Andrew to frequently reminisce the days of his youth on the beaches of New Zealand. Here was his chance to add to his image of surfboards strapped on to Maggie somewhere like some kind of trophy. I am glad that I was up at the truck and oblivious to what happened next until all were safe and back on shore.

It was Andrew’s turn to sit on shore while the boogie boards and surfboard were occupied by the other three. Andrew looked out and saw Hannah way out at sea being tossed by unrelenting waves. Leike and Pavla were desperately and unsuccessfully trying to reach her. Without even thinking about his own safety only thinking of his little girl, Andrew plunged into the water only to be caught up in the same rip tide being pulled out to sea WITHOUT A BOARD. Leike, like an angel, caught up with him briefly so that Andrew could rest on her board then catching a wave in to find help. Pavla, in the meantime caught up to Hannah, like a rescuing angel and brought her in to shore. Leike now came back out with Pavlas board only to find no Andrew. All feared they wouldnt find him again. Andrew was still being pulled out to sea without a board, continuing to be tossed about. Andrew was now too tired to do anything but kick his legs slightly while he tried to keep above the unrelenting waves. He was completely disoriented by this time. He didnt know where the shore was. He focused on staying afloat. At one point he tried again to touch ground with the tip of his toes. He touched ground and realized he was coming in to shore tho thru no effort of his own. There must have been an angel in the waves.  He finally reached shore completely void of any strength and shaking with cold and sheer exhaustion.

All went into a fisherman’s shack belonging to Hassan and his brother who had also gone into the water like a brave warrior angel, bringing people into safety then wrapping them in blankets and serving tea to the shaken swimmers at his shack.  Later the 4 came walking back up to the trucks emotionally and physically exhausted.

As we were still recounting from the events Abigail, Alana and TJ decided to go for a mud plunge. Smothering themselves in blue-black mud like the day before. Forming their hair into bizarre shapes like the Leningrad cowboys. Having a great time plunging themselves into the bank of mud. I was in the truck still reeling from recounts of the other events, laying down and having cuddles with Hannah, who was still shaken. Pavla comes in and is being held by Rachel as she starts to recover from the events. Abi comes to the door and says, in a very calm and composed manner that is very Abi, “Mum, I think I cut myself”. I look out the door to see Abi covered head to toe in blue-black mud except for the blood streaming down her right leg. I grabbed a jerry can and doused the leg with water to show 3 bloody stripes across her leg. The worse being a gash about 6 inches long and open about the width of my thumb. I yelled to Andrew inside the truck who was in a half stupor from exhaustion that we needed to go to the hospital. I wrapped the wound with clean rags and Alana, our cleaning angel, brought Abi down to the small inlet to rinse off some of the mud while we packed up the truck. We were ready in 5-10 minutes to drive an hour to the hospital in Guelmime. After a very bumpy one hour ride and alot of assistance by the newest member to our truck family and resident communicating and culture angel, Rachel, we arrive at the hospital.

Walking into the Urgencies department we expected to be there for hours and pay a huge bill. Quite to the contrary, we were out within half an hour after great care, 10 stitches, no bill and a perscription to fill.

After filling out our perscription and replenishing our fresh fruit and veg supplies we were driving out of town to Hassan’s, our friend and personal oasis in the Sahara, and Abi (our family observer par excellance) looks out of the window and sees Philip, a good friend from the Rainbow gathering. Andrew pulls over, I jump out and half an hour later 5 old friends are jumping into our truck on the way to Hassan’s. They say we were their angels bringing unity after a very difficult day for them. I like being called angels. What is better than that.

At the end of the day we arrive at Hassan’s house where he reminds us over and over, “this is your house in the Sahara, this is your garden, you are home”. Hassan was our homecoming angel. We all contribute to a nice, life-giving soup and bake the beautiful fresh bread started by Abi before her injury. We then fall into bed.

Angels all around when times are rough if we just take the time to look.