I woke early in the day we were going to Indonesia. I made sure my backpack was packed and waited for the others to wake up as well.  It was hot in India. It was only me and Mum, Gwennie and Priscilla. My dad and other 2 sisters were in Egypt. We were going to see them again in Indonesia. I was looking forward to the flight, planes are my favourite way of transport.  You get to look out the window and see everything from a birds eye view and go through clouds, not just look up at them.  Finally everyone was awake and ready to go. 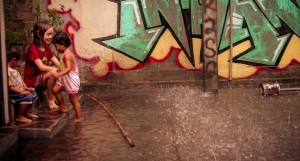 When we arrived at our destination there where lots of people waiting outside to greet us.  They told us there names but don’t remember most of them because there were so many.  Inside the house was bigger than I expected probably because there were not many doors.  In the middle and a bit to the right was a courtyard without a roof it was hard to tell if you were inside or outside.  Then they took us in our rooms.  One of them was white and blue with a Queen size mattress on the ground and at the end of the room was a little hallway that went of to the left witch i guessed led to a toilet.  The next room had two doors one from the main hall and one from in the other room it had pink walls with butterflies on it and had mattresses all over the ground.  I made friends on the first day all of the kids were younger than me but it didn’t matter.  One day it rained a lot and me and two of the younger kids ran around in the courtyard and got soaked. 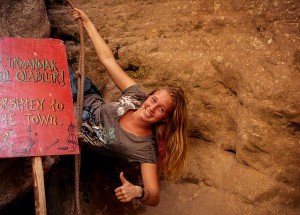 Lizzy was tired of people talking about her long blond flowing hair like it was made of spun gold. They always said, never cut your hair, you would not be you without your hair, you are beautiful because your hair is beautiful  and on and on and on. One day she said she had enough of it. She said we will be going to New Zealand soon and start a new season so she went up to Priscilla and asked her to do the honer.  Priscilla was delighted. She wanted to get started straight away. 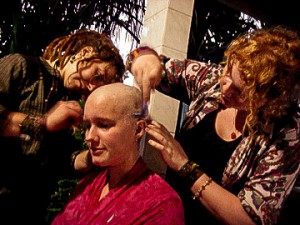 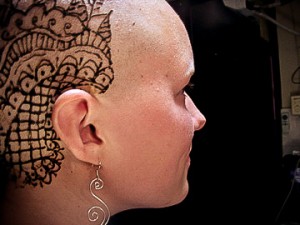 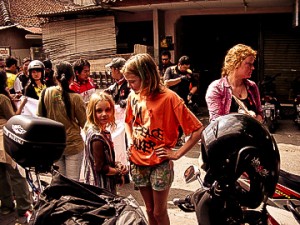 The next morning everybody was up early and looking excited.  I didn’t know what was going on but when I went outside all I could see was scooters.  They were down the street outside the house and more were still driving in. Most of them were black but some were grey, green, blue, brown and lots of other colours.  Soon everyone was outside getting on scooters.  Before I knew what was going on I was on a scooter waving goodbye to my family.  In my group there were three or four scooters with about three or four people on each one.  Luckily two of my sisters were with me but were on two of the other scooters.  We stopped at the beach and started grabbing apples from the scooters and walking down the beach. We gave them out to random people along with red ribbons.  Some of them did not want them but others were delighted to get them. I still didn’t know what was going on but I gave out apples to everyone I saw.  After all of our apples and ribbons were gone we got back on the scooters and went to a park.  A few people that I recognised were already there when I arrived and after a while almost everybody was there except my dad’s group.  After they got back they all brought out food from were they are from and started giving it to each other.