Spent the morning studying and writing then took off hiking in the afternoon. We hiked through the farmland to get to the famous waterfalls. BTW that is a real, live kitten sticking its head out of TJs backpack. It is not our kitten. She is Karim’s. Her name is Karima.

Hannah quickly took over the lead when she found her walking stick. She was living out her alter-ego of Indiehannah Jones. 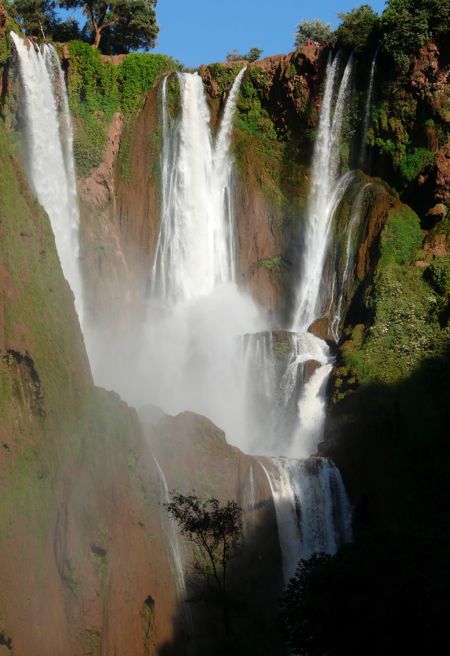 After about an hour we got to the top of the falls. Andrew stopped to take his epic Hasselblad (old school medium format camera)photo. You know, nothing prepares you for a sight like that. Seeing photos we think we have seen it all but to see a wonder like this up close and personal. I guess it is awe but it is also a lump in your throat or takes your breath away. All these statements seem inadequate because they have been cheapened by overuse. So when I came back down to earth  I was keen to get the kids away from the cliff edge so the rest of us walked ahead. We walked for a bit then waited and waited…. and no Andrew. The rest of the day was a constant game of “Where’s Andrew?” I don’t worry about Andrew when we lose him. We lose him alot but today it became a game, a treasure hunt that kept us going.

So, Karim asked one man if he saw the tall man with the green backpack. The man said he went down the hill with others. Great. We were going down too. We weaved back and forth down the hill. Finally catching up to green arrows painted on rocks to a place called Du Vue. Not sure what it was but it was down.

The last step to Du Vue was a rickety bridge.

Oh yeah, your eyes are not deceiving you this rickety bridge is made out of recycled crates etc. Just like in the movies with the hero standing at the edge of a suspicious looking bridge. I guess I have to admit, our drop would not be as severe, but, quite adventurous feeling all the same.

The man at Du Vue had seen the mysterious man with the green backpack. Apparently he stopped for a cup of tea, checked out the camping for future reference and continued across THAT bridge. But THAT bridge is the one that the kids saw and said “Well, good thing we don’t have to cross THAT bridge it is much longer and more rickety looking.” 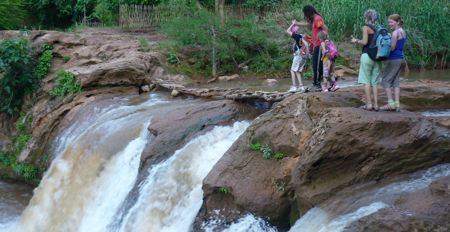 Cross THAT bridge we did and continued our treck. As we trekked closer and closer to the falls we passed wonders like heart shaped leaves and fig trees and lots of bamboo. We also went through more very amazing little campgrounds. Ones that you would trek down the falls with your tent on your back to stay in. Ooooh! What fun. As we got near the base of the falls and felt the overspray we caught a little pontoon boat across the river and found.

Monkeys!!! Actually mountain baboons. We spent ages watching these two. One grooming the other. We really felt like tourists, Oooohing and Ahhhhing, but none of us had ever seen monkeys or baboons of any sort in the wild before. Only in the zoo. As time goes on I enjoy the zoos less and less as I see animals in cages. Even fancy cages – they are still cages. But these baboons weren’t in cages they were frolicking about on funny looking rocks. 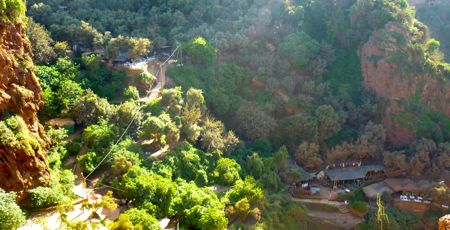 Another thing we found on the other side was stairs. All the way up to the top. How boring it would have been to come down the stairs when we had such an adventurous route. It was nice to climb up the stairs as it was getting late.

Oh yeah, Where’s Andrew? I almost forgot. We were so excited about the baboons. The man with the pontoon boat said that he saw him about half an hour ago and he went back up the cliff on the same side. We thought if we went up the other side we would be able to see him better as there are too many paths going up and down – or we would have seen him before. We decided to go up the other side. There were also those beautiful stairs.

When we reached the top on the other side we still could not find Andrew. As we were hanging out by the road Karim heard some of the locals yell out “Here come the hippies!” And in drove Andrew in our truck. Just like the cavalry. You see, by this time it was dark. We had a great time telling stories to each other about our day.

Andrew told us about the HUGE snake he saw. When we asked how big he made a circle with both hands. Uhhh. yeah. I am sure this is not one of those fishing stories.

We told him about the baboons. TJ emphasizing that the baboons have hands just like us and that one kept smacking the other on the but (said with great animation) and kept finding bugs on the other and eating them. Yuck!

Well, I just have to say that I am glad we found baboons instead of snakes.

We had a semi-warm hammam before going to bed. Haven’t been able to clean up since… hmmm…. I think Safi. We feel clean, and tired, we slept well. We will need to go back up to the German family as Andrew left some things behind there and the other german family we met in Tagazout have arrived and we want to quit just crossing paths and spend some time together.

I will end my post with my wish for you from the wall of the  “Bob Marley Paradise ” we saw at the most extreme edge of our days adventures.

SEIZE THE DAY! Oh yeah! We have but one life – let’s live it!