So, it is post-RockonChristmas Festival and we are supposed to be in Morocco. We are being held up by paperwork. But, you know we have been working hard so decided to take a bit of a break. We started discussing among ourselves, “You know people come to the Algarve that dont know Edna and Paulo. There are other great things down here”. We have reluctantly flown the nest to see the Algarve. We are tired, broke and dont like touristy stuff but we decided to go out for a look anyways.

Our explorations brought us to Armacao de Pera. OK I guess there ARE very touristy areas of the Algarve.

We still find interesting things to do – like… uh… torture ants.

However, it seems always possible to meet eccentric gems with words of wisdom. Like Sebastian. He has been on the road for over 20 years. Said he went into a house for 3 days and started twitching. Had to get back to his truck and the road. I was talking to Sebastian about our electric problem giving the appropriate excuse that we dont have alot of confidence with the electrics because we dont have alot of experience with it. With a smile on his face, he says, “Confidence comes AFTER the experience. Don’t you know, with small successes comes confidence. You never get confidence before.” Ouch, I needed that.

Next we went away from the coast because try as we could to take in the coast with style it was COLD and well, touristy.

So, feeling a little bit wiser, we ventured away from the famous coast on a long and winding road that our Nuvi declared did not exist and spent the nite at Dam 1, Barragem do Funcho. 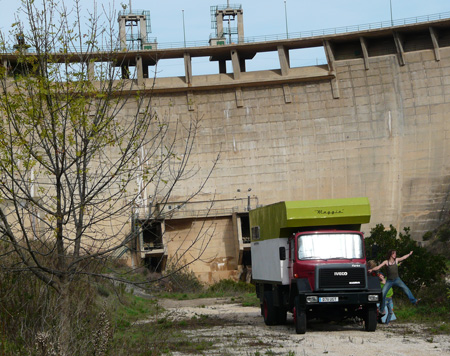 We had the beautiful place all to ourselves. It was great but after a few accoustic experiments (talking in normal voices off the top of the dam to be heard at the truck) we decided to venture on because, hey, we are exploring. We soon found dam 2, Barragem de Arade, and seeing it was already inhabited by a couple of impressively tough overland trucks and their german owners.

We were surrounded by tough old germans that had been doing this for 8, 10 and 16 years. An impressive lot. Andrew refused to accept any alternative but to spend a couple of nights here to hang with the big guys, practice a little german and learn from some tough overlanders. We have realized that overlanders, however, are not a very social lot. I am beginning to think they might have overlander, go anywhere vehicles so they can run away from people.

This place was also great because it was next to an abandoned restaurant that the 18 year olds used to set up camp.

We also took this opportunity to try out a new Friday Nite pizza recipe. We tried pizza on a stick. We put some pizza dough on the end of an oiled stick and when it was cooked we took it off and filled it with cheese and sauce. Yummy. So, everyone at the dam was talking about Silves as a place to get water, food, internet and a pool so we continued our adventure and checked it out.