You know, ever since we went to SLOT Festival in Poland the first time, we just can’t seem to avoid it.

We have now been 4 times in a row.

We weren’t even planning on going this year until about a week before. We all love it. There are workshops on everything from black-smithing swords to tightrope walking. 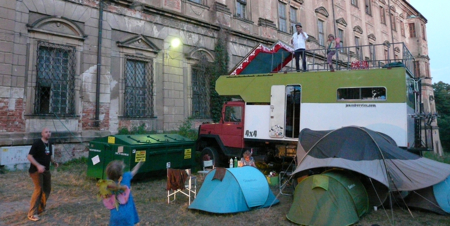 We saw many old friends and made alot of new ones.

Andrew taught under the tree again.

I did something a bit different this year. I made the tipi into a space to make wings.

The thing is, I had this dream a few months back. I was in Africa. I found some beautiful, semi-transparent fabric and thought it would make beautiful wings. I have often thought of making wings. I dreamt that we went to SLOT and people were walking around in wings that were made in a space that I set up and this helped us get around the world.

Strange huh? I thought that if we go to SLOT I should do this. But, since we weren’t planning on going to SLOT this year I wouldn’t have to do it. I was safe. The dream could remain this strange and distant image in Africa, the land of dreams.

Then our plans changed and we went to SLOT. I felt really silly doing this. I did a lot of moaning to my family, Sasha and Derek while setting things up. Moaning to the point that there was a bit of a role reversal with my girls. I was doing the little girl moaning and they were coming back with heaps of motherly encouragement. Doing this hit all my issues. I don’t like the attention. I don’t like looking stupid. Silly I don’t mind but stupid is another issue.  I couldn’t quite figure out how to frame it. Was I to do it all for free? Was I supposed to sell the wings? What about a donation?

I need to tell you, at this point, that I have a belief in a God who cares about me and speaks to me. So, at the risk of seeming even more strange than I already am, I need to say that I think that this dream was from God and that He wanted me to do it. OK, I said it, Whew. To add to this, Derek had some really good advice for me. He said that the exact frame for a wing-space was unimportant. If I think that God wanted me to do this, then it was a simple matter of obedience.

So, instead of doing what makes sense and making money by selling wings to unique, eclectic shops in wealthy countries I take my partially made wings and set up a space in an art festival in a struggling country among economically challenged young people alongside over a hundred free workshops and then ask for donations for our diesel in a country where “donation” is a bizarre concept. All this because of a dream I had in the Sahara and a very strong feeling that I was supposed to do it with no assurance that I wouldn’t look like a complete idiot doing it.

Abi and I cut out and sewed together hundreds of wing panels, with my hand-crank Singer sewing machine, the week before.

We went to slot and set up our space. We set up the tipi. Painted a sign. Hung up some wings.

Our space was completely full of people pretty much the whole time it was open. We covered our costs with a single generous donation.

We left the tipi up for overflow for the neighbouring tea tent after we ran out of supplies to make wings and sold every last pair of intact display wings for donations.

I need to say, at this point that we didn’t do any clever marketing or advertising. We tried to print some cards off and our printer cartridge suddenly became defective. People just saw the tent and the wings and asked if they could make some. After we ran out of supplies for making wings people sought out me, or one of my girls, to ask for wings. 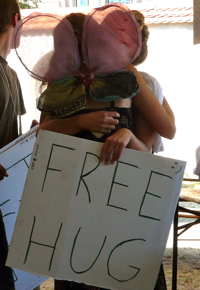 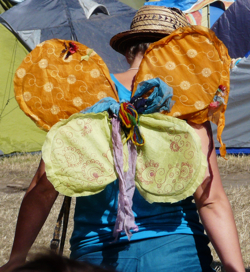 Over the next days the wings were popping up everywhere. Just like my dream, only better.
I think the wings made people happy… and beautiful… and free in a world where this is all in way too short supply. There is just something very special about wearing wings. It opens up a world of possibilities. Especially wings that are huggable.

We also got to fill up our diesel tank on our way out of Poland. Which was incredible because we drove to Poland with no money to fill the tank for our return trip.
Technorati Tags: Slot art festival, poland, wings, dreams

Our first festival of the summer was the Slot festival in Poland. The Nuvi in our truck brought us an interesting route. 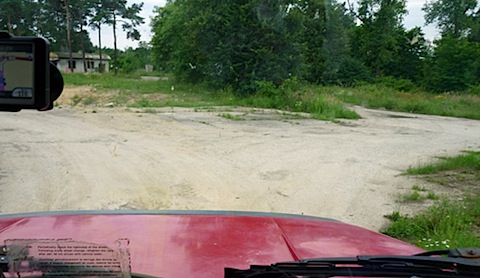 We arrived with a day to spare to get ready. Hannah has the hairdo ready. 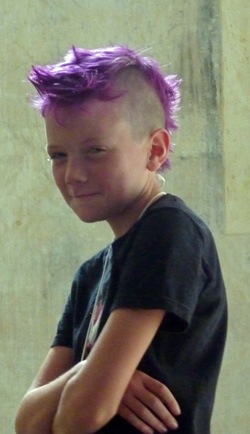 Andrew has other preparations. Hmmmm. What is in the shovel…… give up…. 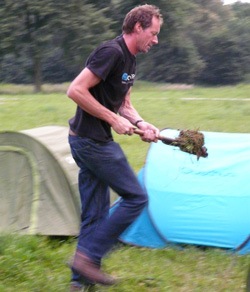 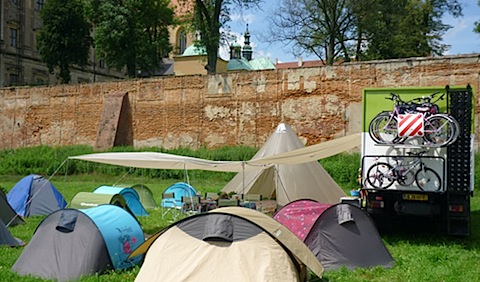 And here come the people 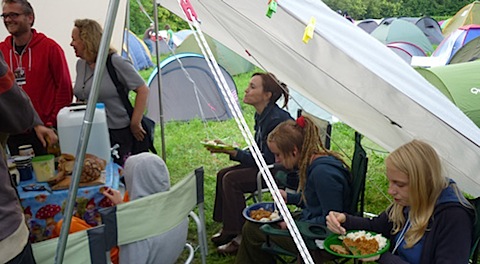 and more. You know the hardest thing for me with festivals. So many amazing people and not enough time to spend nearly enough time with each.

Some quality solo time for one of our friends.

The large, intimidating light shone on me and Klara. It marked the photo shoot commencing. Beth held up her Large Camera and my mum held up her inferior one to capture the moment. Before we new it we were crowded with kids posing in very interesting and funny ways. We all even got out an umbrella out.

Derek and Sasha saw what we were doing, copied it and ofcourse, took it too extremes. Liz